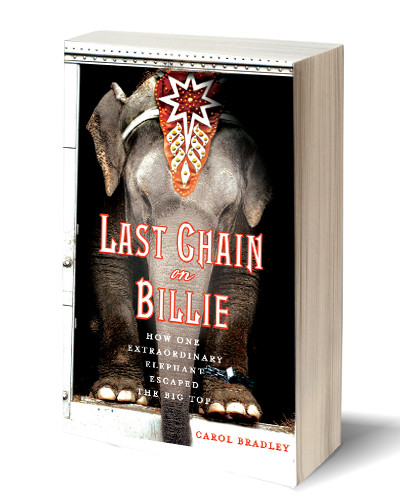 How One Extraordinary Elephant Escaped the Big Top by Carol Bradley

Left in the wild, Billie the elephant would have spent her life surrounded by her family, free to wander the jungles of Asia. Instead, she was captured as a baby and shipped to America where she arrived in the mid-1950s, long before circus and zoo-goers worried about animal living conditions. For twenty-three years she dazzled audiences, but she lived a life of neglect and abuse. As years passed, Billie rebelled.

When she attacked and injured her trainer, a federal inspector ordered her taken off the road. For a decade she languished in a dusty barn. Finally, fate intervened. The U.S. Department of Agriculture removed Billie and fifteen other elephants as part of the largest elephant rescue in American history. Billie wound up at The Elephant Sanctuary in Tennessee in 2006, but she thundered with anxiety in her new environment and refused to let anyone remove a chain still clamped around her leg.

Last Chain on Billie charts the growing movement to rescue performing elephants from lives of misery and tells the story of how one emotionally damaged elephant overcame her past and learned to trust humans again.

See video of Billie's chain being removed at The Sanctuary.